An interview by Laurent Richard with “Guacamaya,” the hacking collective behind the “Mining Secrets” leak. 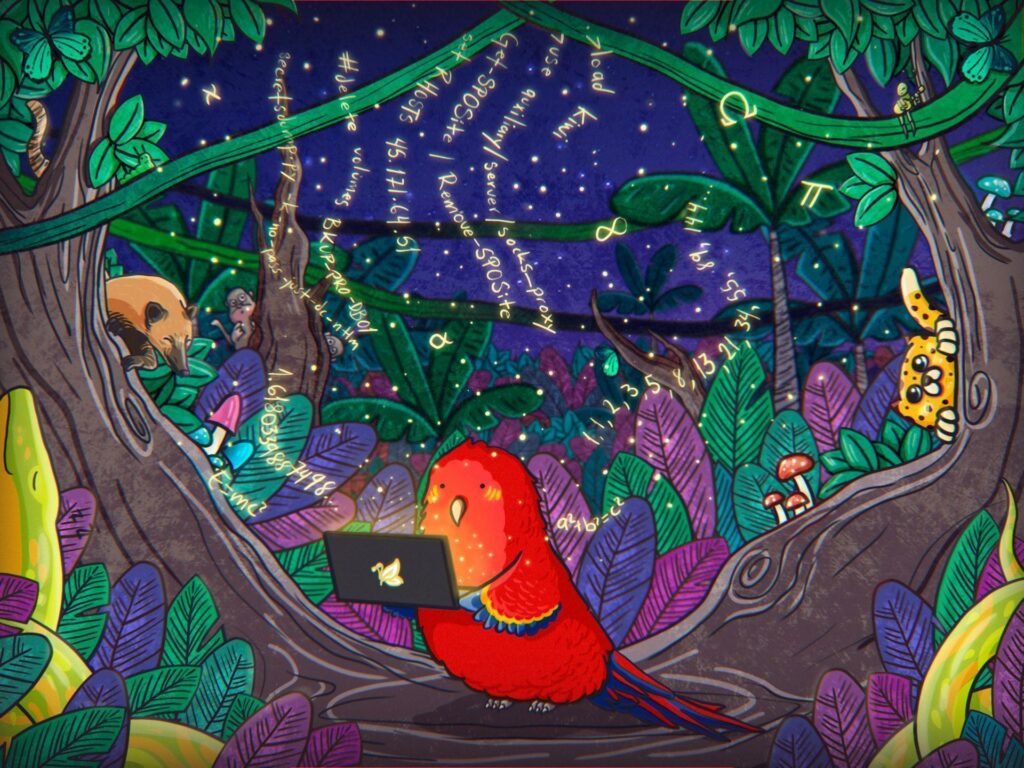 “A photo of us at work hacking Pronico.” The hacking collective behind the leak, aka “Guacamaya.”

Who are you and how do you present yourself?

Guacamaya is all of us – all people affected by the invasion and dispossession of Abya Yala [N.B.: a name used by indigenous peoples to describe the American continent]. We are the daughters and sons of those who defended life with life itself; we are from the south, the center, the north, the Caribbean; we were, we are, and we will be anywhere where the invader, the colonist, the neocolonist, the extractivist pillager, violates the rights of communities and cultures, exterminating forests, rivers and seas to accumulate what they consider to be wealth.

Why did you choose the alias “Guacamaya”?

Guacamaya is simply the type of bird from the image. There are different types all across Latin America but the red kind in the drawing is quite common in Central America. Surely it is present in the forests around El Estor.

Why did you hack this company?

The reasons are diverse: injustice in general; criminal offenses committed against the population, the local territory and the planet. The resistance strategies of those of us who suffer oppression must take place globally, on a systemic level. The struggle of one territory must be the struggle of all, because ultimately this is about the defense of life, the human species and other living beings.

What about the local situation in Guatemala inspired you?

A territory like El Estor, in Guatemala, is a story of struggle and resistance. These communities resist and put their bodies on the line every day, no matter how unbalanced the struggle is. One community against a huge apparatus with machinery and power – this is a source of inspiration. The mining company is not going to end its pillaging and the community will always defend its right to live.

Why did you transfer this leak to us?

Forbidden Stories is the international media outlet that has written the most about this mine, and at the same time it is a collective that belongs to the privileged classes. We were almost certain that Forbidden Stories would make it public being an international media is less risky. We felt that sending it to the local press would put them at risk because they have already been imprisoned or threatened.

How would you respond to those who say that getting data this way is illegal?

Legality and laws were created by the system – a completely unjust system that has the planet on the verge of death, a system of laws that has not worked for the vast majority of people. In solidarity and resistance we cannot accept the concepts of legality or illegality, because we would be giving credibility to a system we do not believe in and that we believe must end.

Are you afraid of lawsuits?

Fear of reprisals is not within our lived experience. Living criminalized and imprisoned in an oppressive global system has been a constant since our birth. What else can we be afraid of, if even fear has been taken away from us?

What do you hope to achieve by making this data available?

To expose the company so that everyone knows how it operates, how it profits, and the damage it causes to the territory, as well as their schemes to ally with other private and public corporations to mold laws to their favor, “clean” their image, and ensure that everything remains in impunity.

How would you describe the role of a hacker like you in our society?

The role of a hacker is to take part in the different forms of resistance in any territory where there is dignified rage and a joyful desire for radical revolution.

Why is it important for the public to know what this mining company is doing?

It’s important that the people of the so-called ‘global north’ know that they are part of this genocide, of this terracide, and that every privilege they have and their quality of life necessarily means the annihilation of other beings and of other lands. Dismantling these companies has a number of consequences, among them providing a source of inspiration and an invitation to rebellion. With this information every person will know what to do with their responsibility and knowledge. What is silent does not exist.

Update (08/03/2022): Since the publication of the “Mining Secrets” project, the hacking collective “Guacamaya” has published its own media release and a video tutorial about its hack.

Mining Secrets | All the articles